The Celts (/kɛlts, sɛlts/, see pronunciation of Celt for different usages) are a collection of Indo-European peoples in parts of Europe and Anatolia identified by their use of the Celtic languages and other cultural similarities. The history of pre-Celtic Europe and the exact relationship between ethnic, linguistic and cultural factors in the Celtic world remains uncertain and controversial. The exact geographic spread of the ancient Celts is disputed; in particular, the ways in which the Iron Age inhabitants of Great Britain and Ireland should be regarded as Celts have become a subject of controversy. According to one theory, the common root of the Celtic languages, the Proto-Celtic language, arose in the Late Bronze Age Urnfield culture of Central Europe and parts of France, which flourished from around 1200 BC. 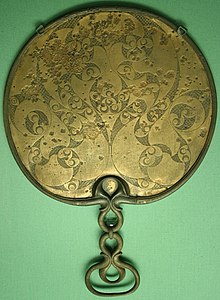 The reverse side of a British bronze mirror, with spiral and trumpet motifs typical of La Tène Celtic art in Britain

According to another theory proposed in the 19th century, the first people to adopt cultural characteristics regarded as Celtic were the people of the Iron Age Hallstatt culture in central Europe (c. 800–450 BC), named for the rich grave finds in Hallstatt, Austria. It is thus that this area is sometimes called the “Celtic homeland”. By or during the later La Tène period (c. 450 BC to the Roman conquest), named after the La Tène site in Switzerland, this Celtic culture was supposed to have expanded by trans-cultural diffusion or migration to the British Isles (Insular Celts), France and the Low Countries (Gauls), Bohemia, Poland and much of Central Europe, the Iberian Peninsula (Celtiberians, Celtici, Lusitanians and Gallaeci) and northern Italy (Golasecca culture and Cisalpine Gauls) and, following the Celtic settlement of Southeast Europe beginning in 279 BC, as far east as central Anatolia (Galatians) in modern-day Turkey.

By the mid-1st millennium, with the expansion of the Roman Empire and migrating Germanic tribes, Celtic culture and Insular Celtic languages had become restricted to Ireland, the western and northern parts of Great Britain (Wales, Scotland, and Cornwall), the Isle of Man, and Brittany. Between the 5th and 8th centuries, the Celtic-speaking communities in these Atlantic regions emerged as a reasonably cohesive cultural entity. They had a common linguistic, religious and artistic heritage that distinguished them from the culture of the surrounding polities. By the 6th century, however, the Continental Celtic languages were no longer in wide use.

Insular Celtic culture diversified into that of the Gaels (Irish, Scottish and Manx) and the Celtic Britons (Welsh, Cornish, and Bretons) of the medieval and modern periods. A modern Celtic identity was constructed as part of the Romanticist Celtic Revival in Great Britain, Ireland, and other European territories, such as Portugal and Spanish Galicia. Today, Irish, Scottish Gaelic, Welsh, and Breton are still spoken in parts of their historical territories, and Cornish and Manx are undergoing a revival.

How Many Calories Does Running Really Burn?

ABOUT US
Newspaper is your news, entertainment, music & fashion website. We provide you with the latest news and videos straight from the entertainment industry.
Contact us: contact@yoursite.com
FOLLOW US
© Copyright 2017 - Newspaper WordPress Theme by TagDiv